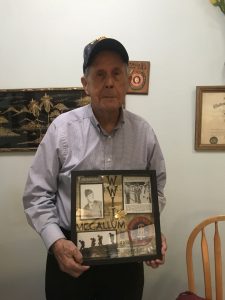 We hope you can join us Saturday, January 9th at 10AM PST (1PM EST, 6PM GMT) when we go live with WWII veteran Neal McCallum! Here are some photos and information about Neal so you can get to know him and come up with some great questions.
Youtube live stream link https://youtu.be/dsdI6_cU3tc
On Easter Sunday, April 1,1945, Neal was in the 6th Marine Division reserve. When the 6th division Landed on Okinawa. The 6th Marine Division turned north to capture over half the island. During this time at dusk, he saw hundreds of enemy attack planes and kamikaze planes attack the fleet (+/-1500 ships). The flack fell back all around them. By April 22 the 6th Marine Division had taken the North part of Okinawa. Neal thought his battle was over, but in the Southern part of the island, the US Army was having difficulty.
Neal and his unit moved on the line relieving the 27th Infantry Division on May 8. Then the Battle for Sugar Loaf Hill Complex started. Sugar Loaf Hill itself was taken on May 18. On the afternoon of May 18 the same day, Fox Co. made an attack on Horseshoe Ridge behind Sugarloaf. Neal’s Fox Company was driven back after taking many casualties.
Neal lost many comrades In this assault, most notably one was Victor Hanson, uncle, and namesake of Victor Davis Hanson of the Hoover Institute. There were so many killed and wounded. He still can see them back on Guadalcanal smiling and singing the refrain: ‘’And her tears flowed like wine, yes her tears flowed like wine, she’s a real sad tomato, she’s a busted valentine’’.
On the morning of May 19, 1945, they were relieved by the 4th Marine Regiment. For the moment there no longer was a 29th or 22nd Marine Regiment until replacements came in. On May 19 as he was being relieved about 100 yards to the rear, they came under heavy Japanese artillery fire. When Neal received a big gunshot wound on his right calf. After two operations his severed nerves and veins were fused. 3 days later Neal took his first plane ride to Fleet Hospital 111 on Guam. Where he met over half of his Fox company soldiers. 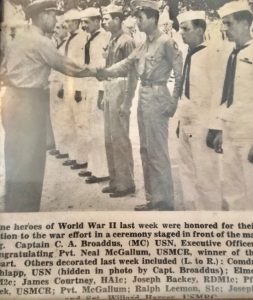 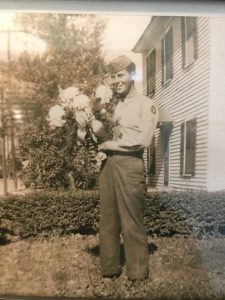 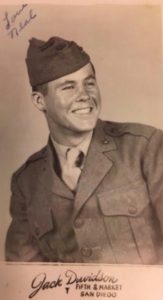