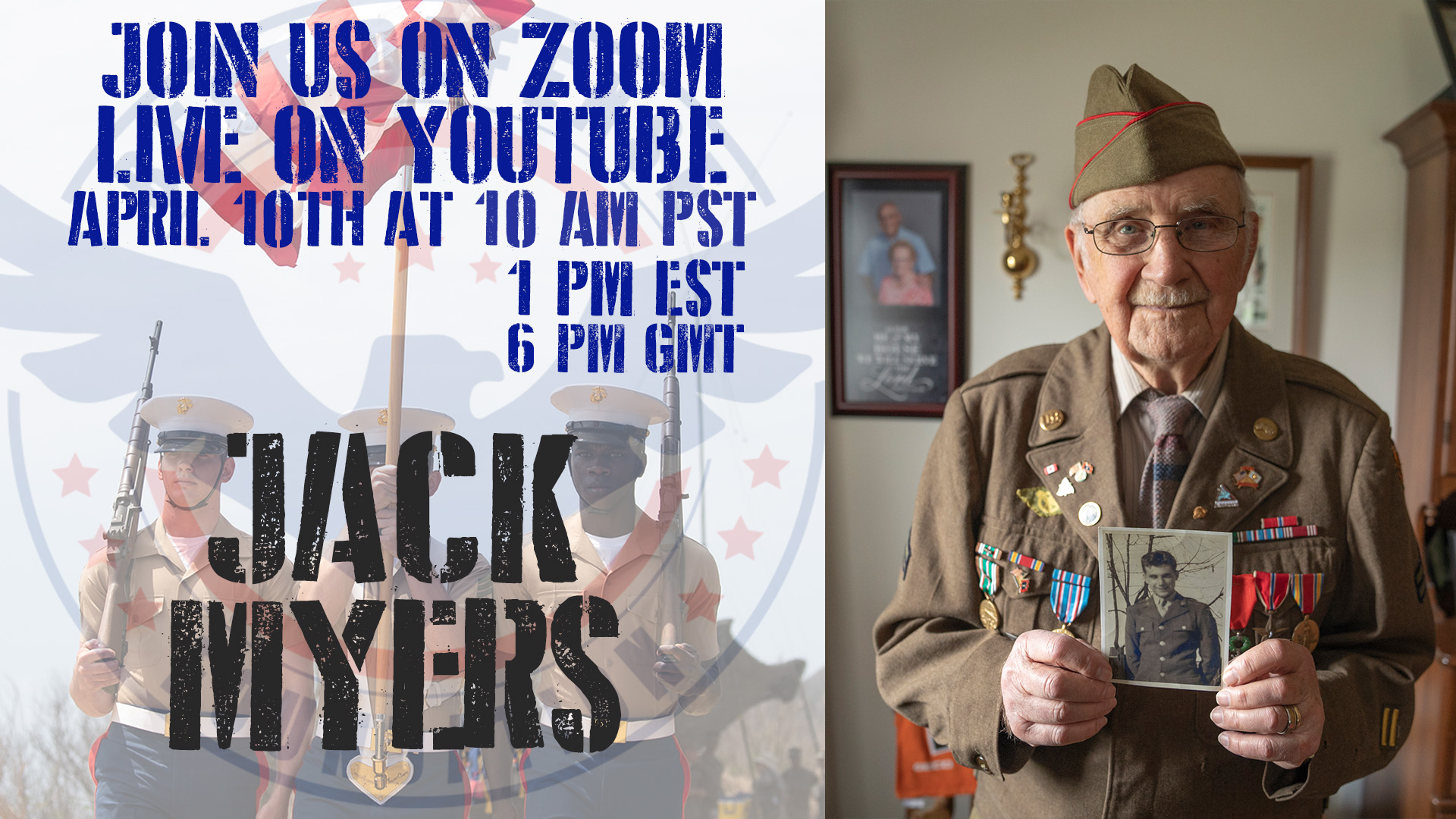 Have you always wanted to meet a WWII veteran and ask him questions? Now is your chance! Make sure you have Zoom downloaded on your phone or computer and we will be inviting some of you to join our video conversation live on Youtube! We wish we could be out in person with these guys but this is the next best thing!
Ask Jack Myers a question live on Youtube! Come join our Zoom conversation Saturday, April 10th at 10:00 AM PST (1 PM EST, 6 PM GMT) when we go live on Youtube. We will post the link to join on Zoom in the chat section of Youtube when the live stream starts. Join Jack Myers, Donnie Edwards, and some of the Best Defense team for a great time with some great conversations about WWII! Set a reminder and subscribe to our YouTube page!
Youtube link https://youtu.be/RX67e2vFWMs
One of thirteen children, Jack (96) was born on June 17, 1923, in Williamsport, Maryland. In 1943, he was drafted into the army and trained to be a gunner with the 692nd Tank Destroyer Battalion. Arriving in Cherbourg, France, on September 23, 1944, they rapidly advanced to the southern part of the Netherlands to support the 104th Division and British forces in the battle of Antwerp, Belgium. Soon after, the 692nd Tank Destroyer Bn. advanced to Aachen, Germany, and the Siegfried line.
His battalion occupied defensive positions along the Roer River during the Battle of the Bulge and supported the 104th Div. from the Roer to the Rhine River and helped capture Cologne. After clearing more Siegfried Line fortifications, they crossed the Rhine on March 31, 1945, and drove across Germany to advance to Munich by April 30th.
Jack and the 692nd TDB were attached to the 42nd, 63rd, and 104th Infantry divisions during World War 2, and was also involved in the liberation of Dachau concentration camp when attached to the 42nd Infantry Div. For many years, Jack was too emotional to talk about his experiences in World War 2, because of losing so many friends in combat, but when he eventually started talking about his experiences, he discovered it became easier to deal with the past.
DONATE NOW