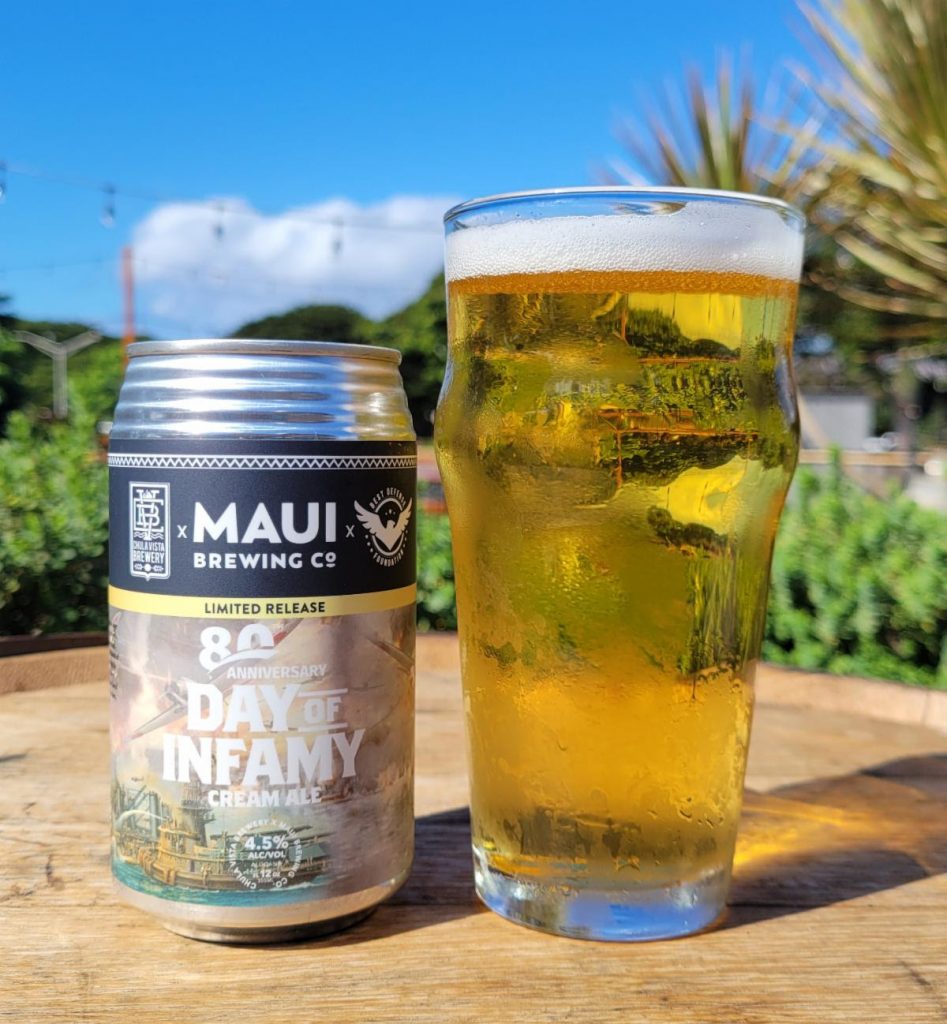 Kihei, Hawaii (November 23, 2021) – This December 7th marks the 80th Anniversary of the attack on Pearl Harbor, “A date which will live in infamy,” as famously quoted by then American President Franklin D. Roosevelt. To commemorate the event, Maui Brewing Company announces the release of “Day of Infamy” Cream Ale, a collaboration beer developed with veteran-owned Chula Vista Brewery of Chula Vista, California along with Best Defense Foundation, a not-for-profit volunteer organization dedicated to honoring and celebrating veterans from past conflicts by preserving their stories and educating future generations about the heroism and sacrifices of those who have served.
Founder of the Best Defense Foundation, Donnie Edwards stated, “Best Defense Foundation is proud to partner with both Chula Vista Brewery & Maui Brewing on this exclusive ‘Day of Infamy’ Ale in honor of the 80th Anniversary of the attack on Pearl Harbor. These two breweries go above and beyond in support of the military, and we couldn’t be more excited to partner with and release this delicious beer in support of our World War II veterans.”

Maui Brewing Company’s Lead Brewer Mike Petker explained how MBC became involved. “Chula Vista Brewery reached out to MBC to collaborate for the 80th Anniversary Pearl Harbor,” stated Mike. “I personally had worked with both Nacho and Hodges from CVB when we were at Pizza Port Brewing Company. MBC’s Brewmaster, Kim, is also well-acquainted with both of them through events, collaborations, and talk-story over the course of many years in the industry. We were ecstatic to learn that Chula Vista Brewery and the Best Defense Foundation wanted MBC to participate in this once in a lifetime opportunity. Our goal for this collaboration is to pay tribute and honor the Veterans who served and protected our nation during WWII.”

Day of Infamy Cream Ale is light, crisp, and golden in appearance. The unique Cream Ale Yeast Blend (WLP080) offers very distinct flavors and subtle hop aroma with citrus undertones. The complexity of the grain bill, yeast and the Bravo and Loral hops makes for a very crushable beer in our island climate. The session brew targets 4.5% ABV and 25 IBUs.

“It’s always a honor and privilege when you are given the opportunity to serve those who served you,” claimed Timothy Parker, Founder of Chula Vista Brewery. “Donnie and the Best Defense Foundation is doing just that. Chula Vista Brewery is proud to have teamed up with Maui Brewing Company and BDF to create something special that commemorates the shocking moment of the attack on Pearl Harbor and heroism of those who fought back to protect this Nation.”
In “taking care of the ones who took care of us”, the slogan of Best Defense Foundation, the Foundation will be bringing 60+ World War II veterans back to Hawaii for closure and/or recognition they so deserve. Included in the week-long schedule of events, the official launch of “Day of Infamy” Cream Ale will be held at Maui Brewing Co. – Waikiki on Saturday, December 4th from 5pm to 7pm. Aside from enjoying a fine, fresh craft beer (or spirits), the event will include opportunities for our guests to hear stories from the courageous men and women on their experience from 80 years ago.

A soft launch of the specialty beer which will be available for a limited time in 6-pack cans and on draft begins today, November 23rd at MBC Kihei with availability at Maui Brewing Company locations in Lahaina (Maui) and Kailua or Waikiki (Oahu) in the following weeks.

For more information on the schedule for this momentous occasion, visit Best Defense Foundation.

About Chula Vista Brewery
Chula Vista Brewery will provide craft beers of great quality and flavor to each patron in a comfortable and inviting setting. We will be a place in which locals and surrounding area residents can gather together and enjoy good company in a relaxed atmosphere. We will promote a place of gathering that is enriching and inviting while committing to being the best neighbor we can be. We look forward to promoting our wonderful community to all whom would be our guests.

About Best Defense Foundation
Founded in 2018 by former NFL Linebacker Donnie Edwards, the Best Defense Foundation honors and celebrates our veterans through Battlefield Return programs, Education Initiatives and Special Forces Transition programs. The ethos of BDF is “Taking Care of the Ones Who Took Care of Us”, for more information please visit BDF.org.